(This post is part of the learning c series.)

This article will discuss bitwise operators and common procedures done with them.

If we were to "align" another unsigned short with our variable x, we could perform various logical operations between the two as if they were part of a truth table. For example, suppose we have an unsigned short y with value 9, which is equal to $1001_{2}$. We could perform a logical AND between x and y. The result is as follows:

The one's complement operator, ~, informally known as the unary NOT operator, takes the bits of an integer and flips them: 0's become 1's, 1's become 0's.

It's important to note that the type of integer the result of ~c will be stored in affects the outcome greatly. If we were to store the result of ~c into an unsigned int, for example, the leading 0's of the unsigned int would be converted to 1s, leading to a much larger result.

And is used as a means to turn specific bits off. ANDing a bit at a particular location with 0 makes it 0, and ANDing with 1 preserves the value.

The way we do this is by ANDing with a sequence of bits that are all 1 except for the last 3, which will be 0. We can craft such a sequence in two steps:

When we assign a value to an integral type (char, short, int, long), C will pad the value the necessary amount of 0s to make it fit the type correctly. Thus, if an unsigned char is 8 bits on our computer, the statement

will completely fill c up with 8 bits of 0s. Consequently, we can take advantage of this to construct a sequence of 1s that fills up all 8 bits just by using the unary NOT operator

Generating the bitmask is much simpler using shifts, which I'm unfortunately too bored to discuss in too much detail.

There is a left shift, x << n, which shifts each bit of an integral to the left n times. There is also a right shift. Here are the only details we'll cover, since the shifts themselves are pretty straight forward:

Suppose we have an integral value, and we would like to extract a certain number of bits at a particular position. Specifically, suppose we want to extract n bits from an integral starting at position p, where the rightmost bit is position 0.

So how do we actually achieve the desired result? It takes two simple steps:

In the example above, we can see that getbits(x,5,3) took 3 shifts to the right to get the last bit we were interested in (the 0 at position 3) to position 0. It took getbits(x,3,2) 2 shifts, and getbits(x,6,4) 3 shifts. Thus the number of shifts needed can be generalized to p+1-n, and you can use the examples above to verify that claim. 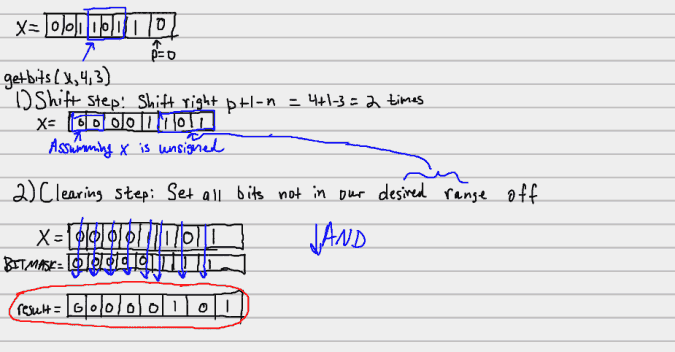 The way to generate this bitmask is to:

The getbits() function can thus be defined as so:

(This post is part of the learning c series.)