Before proceeding with this article, you should be comfortable with basic pointers. Use the following resources below to fulfill the prerequisite knowledge:

If we have an integer x declared via

then x occupies memory at a particular address. This address is just a number, usually represented in hexadecimal. This address can be accessed via &, the "address of" operator.

The declaration int *p states "declare p as pointer to int". So p would be a variable that could hold the address of an integer. After being declared, we dereference p using the dereference operator *. (Dereferencing is covered in the C pointer tutorial.)

Storing the address of pointer variables

Suppose we have the declaration 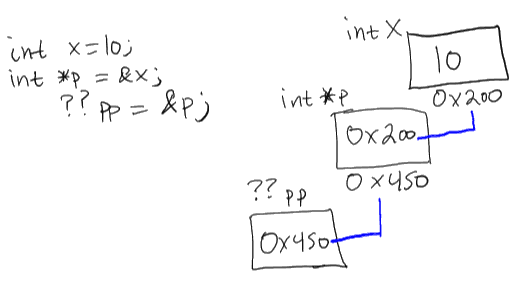 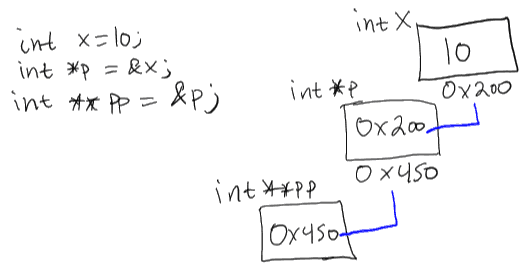 Let's take a look at a basic source code example.

So we've seen that double pointers operate identically to basic pointers in regards to taking the address of a variable. But what about dereferencing a double pointer? Recall that *(&x) == x.

Given the following example:

What would the program output if we were to print out the value of **pp? Let's form some expressions using our fact *(&x) == x.

Let's take a look at a more involved example. Suppose we have the following declarations:

We can observe that: 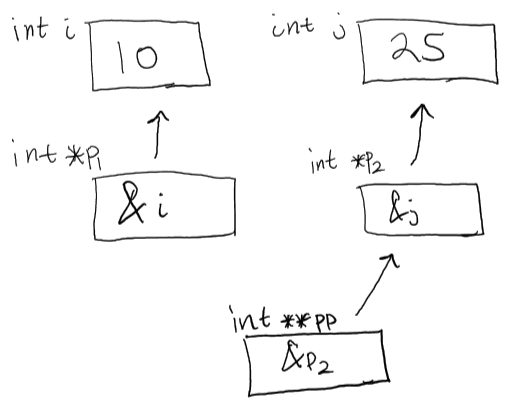 If we were to print out the value of **pp, what would we see? Try to make an educated guess based on the diagram before showing the output.

Since the value of the pointer pp is the address of p2, we say that "pp points to p2". What happens if we change what pp points to? Will that effect the value of **pp? What if we instructed pp to point to p1 instead of p2? 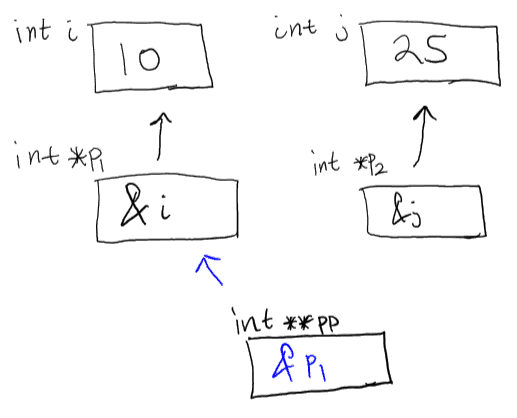 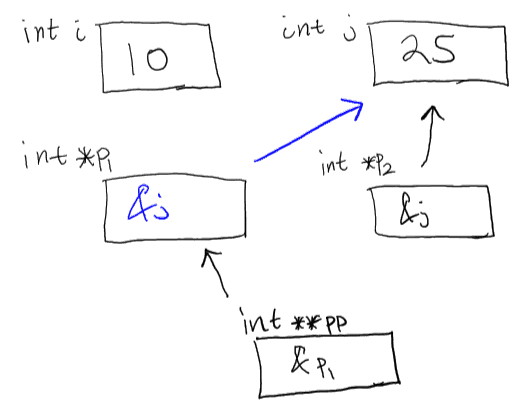 Suppose we have the following declarations again;

Currently, p1 points to the integer i. Is it possible to make p1 point to p2, which is a pointer to int? 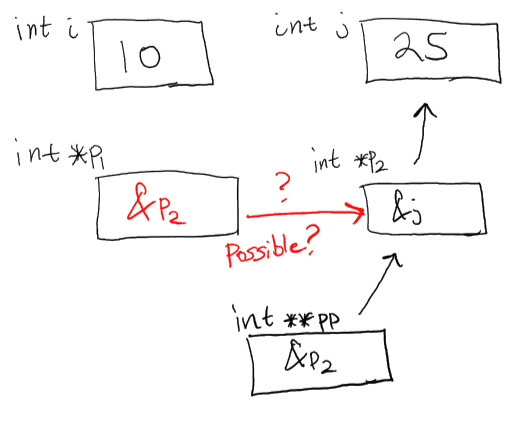 Let's try it and see.

Let's start off with our standard example

Which we can visualize

Now we reassign the value of p2 to p1

This leads us back to our question - Does the assignment p1 = p2 make p1 point to p2? The answer is no. Assignments are only copies of values. In general terms, the assignment x = y means "Store a copy of the value y into the variable x".

Remember, the address of a variable is just some number like 0x7ffdd657318c. If we had a scenario like

Then we know that the value of y would still be 100. y has no connection to x other than the fact that it received a copy of its value at the time of assignment. Similarly, for the assignment p1 = p2, p1 actually has no connection to p2 whatsoever. All that happened was that p1 received a copy of the value p2 was storing, which happened to be the address of the integer j.

From the output we can conclude that p1 does not point to p2 or have any connection to p2 at all. Assignment between pointer variables of the same type is just like any other type of assignment between variables of the same type - a copy of the value is placed into the variable being assigned to. In the case of pointers, the value just happens to be the memory address of some other variable.